HFTGs’ training participation is compulsory for all newbie members.
I received an email from Human Resources stated that my presence on Saturday was compulsory. The training took place at Vietnamese Women’s Museum, and they sent us a pile of information about this site. The figures were so much to remember that I felt scared at first. At home I did read through many times, but still the worry lingered inside my head.
On that day, I came on time and saw a lot of people already there. We gathered and checked other’s knowledge about the place. At 2pm, Ms. Trang and the Museum’s guide led us in. Since we were the official members of Hanoi Free Tour Guides, we did not need to pay for the tickets. 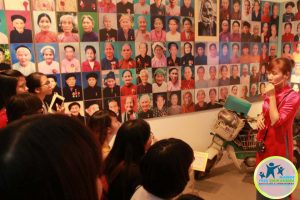 At the entrance, there was a golden statue. The female guide presented us with a story and other members jotted down pretty quickly short notes. She told us that we should talk less because the nature of foreigners was self-reading and self-studying.
Vietnamese Women’s Museum11
Moving on to the second floor, we learnt about marriages and different traditional marriage customs. It was interesting, and we got chances to take some photos before going to the upper floors. We picked up lots of information. Other people seemed excited to try on ethnic minorities’ clothes. We did not know how to wear it right so everybody looked like clowns in the circus. 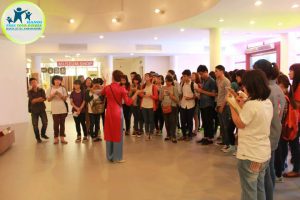 Followed by moments of joy; we stood still to listen to stories of brave women who had serious diseases or in poor condition to survive. And some of us burst into tears when the guide told us about Vietnamese women during the war. They did sacrifice a lot and held up pain to support their children, husbands and relatives in the battlefield. I found it interesting to hear an old lady who travelled across the country to draw pictures of Vietnamese women. Now she still continues her journey as a memoir and gratitude to what the previous generation had done. . After all, Ms. Trang checked our information and we took turn to answer. I volunteered to answer questions about Vo Thi Sau because I had been to Con Dao once and heard a great deal of background knowledge about her. We were overwhelmed by the beauty of Ao Dai through many years of development, it still kept its elegance and uniqueness.
Vietnamese-Women’s-Museum01
Around 4 pm, we gathered as a team to take group picture. It was a blast! Some took time to take a selfie or their own groups. Smiles on their faces were the evident of such an enjoyable day. At the end, a few gathered up and had some snacks. We talked and laughed a lot. We shared our own experience about the tours we had and asked if anyone had anything special to chat about. It was a blast! We had lots of fun!