What did you do in these recent freezing days? Go out with your “bear” or sleep in all day?

About the members of Hanoi Free Tour Guides, we have had a fabulous party on the occasion of the 5th birthday of the organization.

At the peak time of the terrible weather, on Sunday 24th, January, Hanoi Free Tour Guides held a gala of the 5th birthday to look back on the memorable 5 year period and say grateful words to the partners and sponsors who have given us efficient supports in the recent successful time. Besides, this was also an extremely good chance for the members from 9 departments of languages to meet up, hang out and raise their connection. Despite of the strongly icy and rainy night, all the seats in the meeting hall had been taken in a flash.

The atmosphere in the whole room seemed to be extremely electrical with a bunch of not only professional, but also cultural shows.

The show was begun with a sweet song from the country of poplars (Russia) and a lovely Chinese song performed by the pretty girls from Russian Department and Chinese Department. Then the warm and exciting atmosphere was kept with a very special game made by Hanoi Free Tour Guides. You may actually see the way of playing it in our photos below. As for Dao Thanh Cong, who is now our President, this game should be played more frequently because it somehow benefits boys and girls so much. Does anyone want to make a try? Just join us!

The next surprise was an impressive magic show performed by an amazing boy from Hanoi Free Tour Guides. It was really a once-in-a-lifetime opportunity for the members to hang out with him and learn from him a lot of experience about his way of pursuing magic and the lessons from his own obstacles. 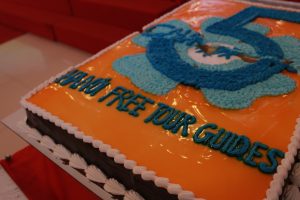 It’s time to enjoy the birthday cake after wholehearted playing time. The cake looked huge and really nice at first, then, funny saying, it was actually disgusting by our not hungry, just greedy boys and girls.

After the break time, a hot competition named Perfect Couple took place with the participation of awesome boys and gorgeous girls of Hanoi Free Tour Guides. Do you see any weird point?

We were enjoying a Yosakoi dancing performance of the “kawaii” girl from Japanese Department before the final round of the competition.

The next one was a fashion show named Light The Night with the extremely unique sets of clothes which had been home-made like a streak of lighting in the prior night. This is the team who has achieved the first prize in the event Light The Night 2015 of Hanoi Free Tour Guides.

Finally, the first prize of the Perfect Couple competition was given to the special couple representing Chinese style. There was no doubt that the beauty of the “Chinese girl” named Mong Quang won the hearts of everyone in the hall.

The gala was also contributed by sweet melodies from the departments of English, French and Spanish. It was just several hours, but we could clearly see that the members of Hanoi Free Tour Guides were not only good at knowledge and language, but they were also talents in other fields. This must be an ideal environment for youngsters who have a desire for experience and improvement. Can you feel it? Join us! We’re sure you’re not gonna miss this huge boat!