Hoa Loa Prison (later known as Hanoi Hilton) was a famous prison located in Hanoi’s French District that received great notoriety because of its use by French colonial government, and later North Vietnamese fighters during the Vietnam War. In its long history, this place became breeding ground for the Vietnamese resistance movement, and later on became main holding camp for American Prisoners of War that were captured during the war. During its active years, the conditions in this prison deteriorated as the number of prisoner increased, and in the years of the Vietnam War American POW were held there in truly horrific environment, although Vietnam government denies those claims to this day.

This prison was built by the French between 1886 and 1901, when it carried the name Maison Centrale (Central House). As the years went, more and more prisoners crowded this small facility. In 1913 renovated prison held over 600 inmates, but that number continued to grow until it held over 2000 people in 1954. Large population and poor conditions continued were one of the reasons why this prison became so hated in the Vietnam, and many people being sent there became more and more angry against French Government and their colonization of Vietnam. It was recorded that many political prisoners started gathering likeminded people and converting the local Vietnamese population because of the harsh conditions inside this prison. Soon Hoa Loa prison (which can be translated as “fiery furnace” or “hell’s hole”) became one of the symbols of colonialist exploitation that contributed to the start of the Vietnamese war. 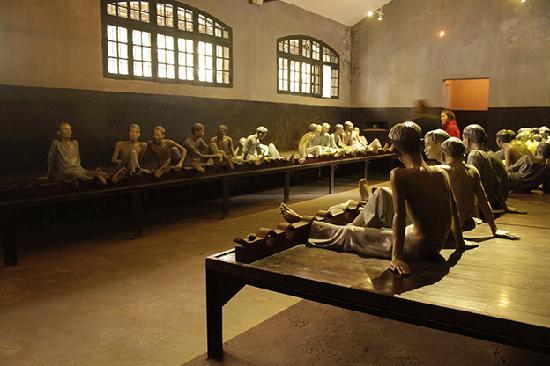 After the start of the Vietnam War, Hoa Loa prison became one of the central points for American POWs. In addition to the inhumane treatment of the prisoners, Vietnamese government used extensive methods of torture to extract military information out of the US soldiers. They used rope bindings, irons, beatings, and prolonged solitary confinement to break the will of individual and groups, and they often wanted from soldier to write public letters that described their prison conditions in favorable light. As the war went on, torture slowly subsided and during 1670 every American POW was transported to Hoa Loa Prison (which was called by soldiers Hanoi Hilton). Large community of US soldiers created better atmosphere that greatly boosted their moral. Some of the most notable soldiers that were imprisoned there were US Senator John McCain, future U.S. Vice-Presidential candidate James Stockdale and decorated U.S. Air Force pilot Bud Day.

Hanoi Hilton was demolished in mid-1990, and in 1999 International chain of hotels Hilton opened Hilton Hanoi Opera Hotel on grounds where prison was located.