As Vietnam’s capital and center of tourism and trade in the country, Hanoi is an entirely busy city.

Hundreds of motorbikes, SUVs and buses spiraling the streets while thousands of pedestrians walk about from one store to other and pushing their way through the noisy crowd is an everyday scenario which creates the pleasantly chaotic character of the place. Of the many attractions the city holds, the Old Quarter is probably its greatest asset from a tourism point of view. With the Hoan Kiem Lake known as the heart of Hanoi, the quarter is its very soul. Don’t let its name fool you, the Old Quarter doesn’t look ancient at all. 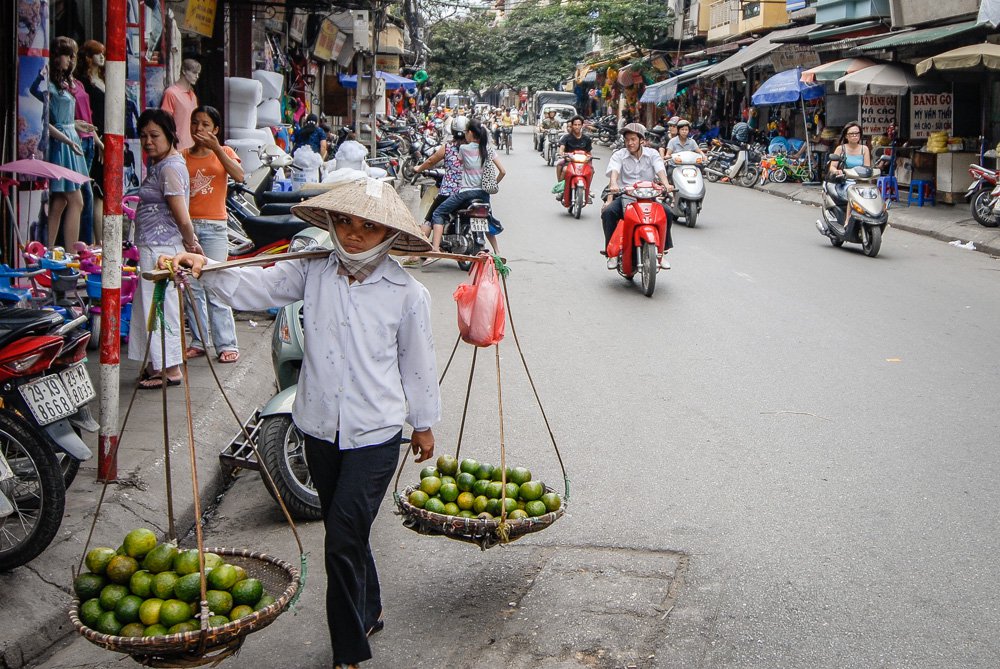 Made up of several dozens of narrow streets mazing its way around, the place is a vibrant visage of modernity and active trade. But why it is referred to as “old” is because beyond the new structures, the tradition, activities and way of life of people settling in the quarter represents a heritage and history that prevailed from over a thousand years ago. To locals and visitors alike, the place is popularly known as the “36 streets”. That is another of the many mysteries that envelope this amazing part of Hanoi. There are actually more than 36 streets. In fact, the area is a labyrinth of over 70 streets packed with family-owned shops selling silks, stuffed toys, artwork, souvenirs, embroidery, food, coffee, watches, and silk ties.

As to where the figure 36 came from, nobody is really certain. Some researchers believe that the number came from the 15th century when there might have been 36 guild locations, which were workshop areas of which, each was selling a different trade. They were not actual streets. When streets were later developed, the guild names were applied to the streets. Others attribute the 36 to a more abstract concept. In Eastern philosophy, the number nine represents the concept of abundance. Nine multiplied by the four directions makes 36, which simply means “plenty” or “many.” Centuries-old Trades Continues to Blossom If you make your way through the Old Quarter’s network of alleys, you will notice a common sight of elderly couples sitting and drinking their tea, youngsters smoking cigarettes on balconies, stray domestic animals, residents chatting with the next-door neighbor, the clutter of open air fish markets, squealing pigs and tinsmiths loudly banging the metals as they go about their craft. But each resident is also a business that comprises the giant market of the 36 streets. Here, shopkeepers sell everything under the sun, from ball bearings and light bulbs, ceramics and silk, clothing and shoes, to live chickens and snake wine. The craft they display are associated with traditional trades plied there for the past hundreds of years.

The Old Quarter, in fact, is a reminder of Hanoi’s storied past – its history has long been tied to the ebb and flow of conquerors and traders over the past thousand years. It was during the beginning of the Ly Dynasty (1010-1225) when Emperor Ly Thai To moved his capital to Hanoi. A community of craftsmen followed the imperial entourage to the new city. Craftsmen performing similar services were organized into guilds, whose members tended to stick together to protect their livelihoods. The Old Quarter began to acquire its reputation as a crafts area when the Vietnamese attained independence in the 11th century and King Ly Thai To built his palace there. In the early 13th century, the collection of tiny workshop villages which clustered around the citadel’s walls evolved into craft cooperatives began to branch out.

All the streets that developed here are called Hang (which means merchandise or shop), followed by the name of their product. Each street had similar group of traders expert in one particular field. Thus, Hang Chieu (mat) sells mats, and Hang Bac (silver) traders specialize in silver and jewelry. Among these renowned silversmiths and blacksmiths are from the northern Vietnamese province of Nam Dinh. They and other craftsmen and artisans began to ply their trades in Hanoi and workers making or selling similar goods set up shop on the same streets because most of them were usually from the same hometown or region. Because inhabitants of each street came from the same village, streets developed a homogeneous look. Commoners’ homes evolved out of market stalls, before streets were formed. There is at least one temple on each street but many of them have been transformed into shops and living quarters. 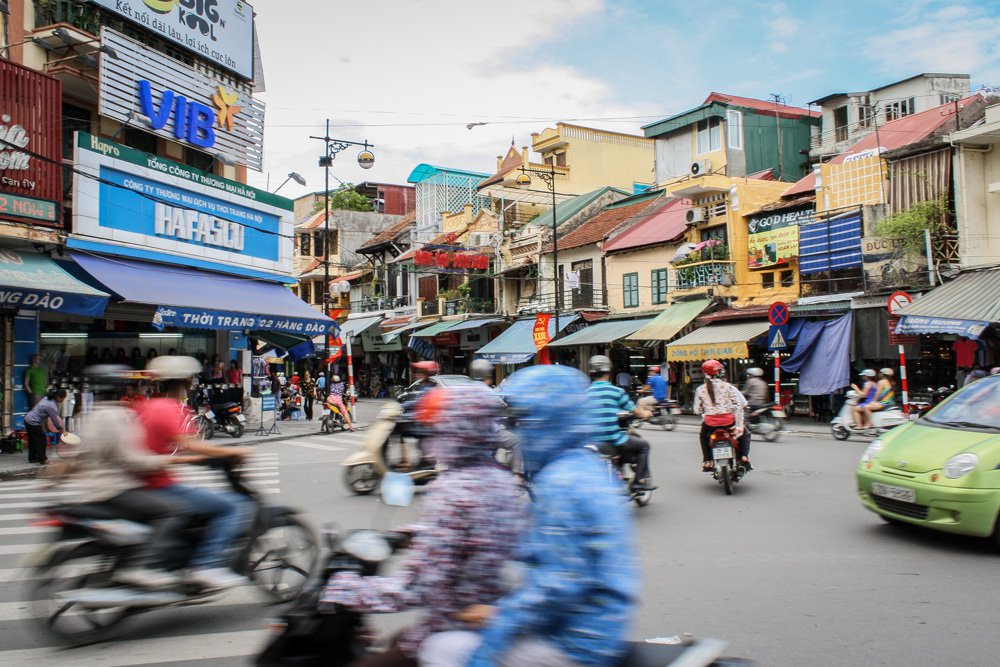 Each “Hang” is not merely a street, but more like a miniature trading village all in its own. Holding on to Tradition as Change Makes Way Today, there are around 30 streets that still keep the name “Hang,” compared to over 50 some century ago. Some no longer trade the products related to their name, like Hang Than (coal), which now sells wedding teas and cakes. Hang Buom (sail), Hang Voi (lime), Hang Be (raft) no long trade in the bulky goods they were named after. Locals have also changed the names of several streets that no longer trade in the products associated with their names hundreds of years ago. The traditional shops on Hang Son (which sold varnish and paint) and Hang Bat Dan (glazed terracotta ware), have been replaced by cha ca (fried fish patties) shops and pho (beef noodle soup) stalls, and Hang Son is now Pho Cha Ca. Hang Chao (rice porridge) now shares a street with hundreds of other shops selling screw and electrical appliances, whereas Hang Dieu (tobacco water pipe) now specializes in blankets, pillows, and cushions. Hang Mam (salted fish) no longer sells mam. Hang Non (hat), Hang Luoc (comb), and Hang Ca (fish) streets have now transformed to a stretch of boutiques selling luxurious goods. Hang Gai specializes in selling expensive silk to foreigners.

Still, many of the traditional streets continue to flourish and live up to its name despite the challenges of ongoing urbanization. Many locals, even, still prefer shopping on several streets that have barely changed. Hang Bac (silver) and Hang Khay (products inlayed with mother-of pearl) are still popularly sought for even with the presence of newer and more modern options for shoppers. Hang Dao remains to be the city’s most popular clothing stop for women. The first shop owners there were skillful tailors from villages surrounding Hanoi. So when they eventually named the street running through the area, it became Hang “Dao”, which means “flower” or “beautiful woman”, in reference to bright clothes and the ladies who bought them. Every mid autumn festival, Hang Ma (shiny paper products such as gift wrappings, wedding decorations and miniature paper objects to burn for the dead) still lights up the way as it did centuries ago.

As a tradition, parents still take their children to buy toys or lanterns. Looking above the ground floor shopfronts, you will get a sense of the historic narrow fronted architecture. The long narrow tube houses are interrupted by colorful, if not fading, centuries old Chinese shophouses, French villas and Buddhist pagodas and temples. Hanoians associate a person’s character based on which area of the old quarter they settle. They believe that men from Hang Bac are polite and elegant, while women from Hang Dao are known for their charm and beauty. Such characteristics are said to play a huge role in the appeal of the 36 streets on top of the wonderful shopping experience and the amazing spontaneous scenes. Strolling through Hanoi’s Old Quarter or “36 streets”, one can perceive the beauty and better appreciate the heritage and tradition that is so alive in its alleys – something which should be preserved not only by the authorities, but the locals alike.